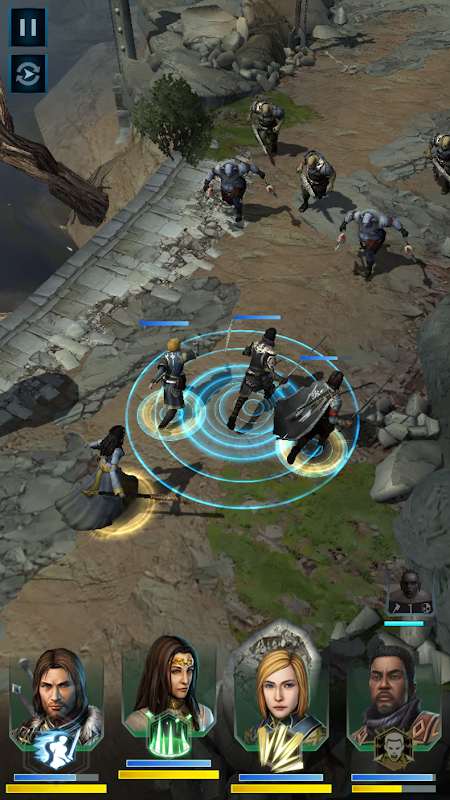  Battle across Middle-earth with millions of other players in the definitive The Lord of the Rings and Middle-earth: Shadow of War experience on mobile... Read More

Battle across Middle-earth with millions of other players in the definitive The Lord of the Rings and Middle-earth: Shadow of War experience on mobile! Command iconic champions like Gandalf and Gollum as you wage war against Sauron’s armies in this epic, real-time RPG. ONE DOES NOT SIMPLY WALK INTO MORDOR! With the help of the new rings of power, summon Champions from Mordor and across Middle-earth, growing an army that will topple Sauron’s forces. Blast through enemy ambushes, duel Orcs in the fighting pits, battle with your Fellowship, and much more. COMMAND ICONIC THE LORD OF THE RINGS AND MIDDLE-EARTH CHAMPIONS -Collect, equip, and upgrade iconic champions from LOTR and Shadow of War, including Gandalf, Gollum, Legolas, Aragorn, Boromir, Ratbag, and Talion. FIGHT IN REAL-TIME WITH FRIENDS AND ENEMIES -Battle rival Champions in real-time (synchronous 4 v 4 PvP) and slay powerful Orc armies (asynchronous PvP). -Direct your team's combat tactics in real-time and launch powered-up special attacks when it matters most. AMASS AN ARMY OF ORCS AND NEMESES -Dominate your Orc nemeses or accumulate a trail of dead. Each Orc you face remembers your decisions, creating a unique experience for every player with the award-winning Nemesis System. JOIN A FELLOWSHIP -Strategize with your friends and request/share upgrades to help your journey


 More like Middle-earth: Shadow of War: Show all+

 Is Middle-earth: Shadow of War yours? Claim it!