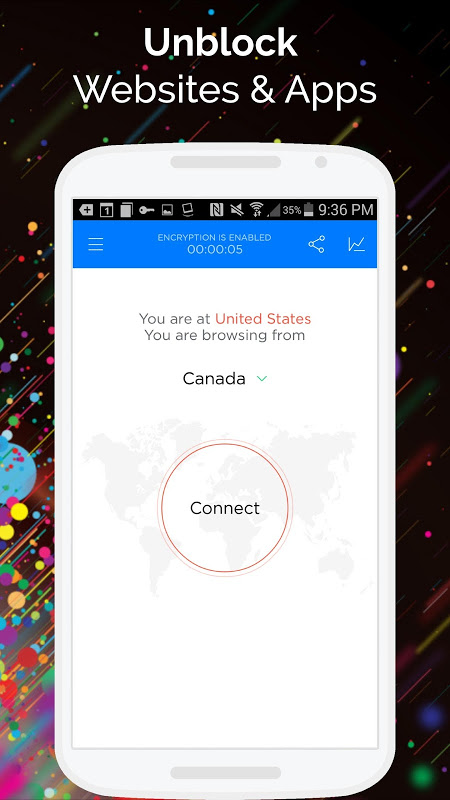  Unblock any website or app with Touch VPN – the free unlimited VPN for Android!

Unable to access some websites? Worried about unprotected Wi-Fi hotspots? Want to be anonymous and protected from surveillance and hackers? Touch VPN – the free unlimited VPN – is the best solution for you! Highlights of Touch VPN – the Free Unlimited VPN for your Android ✓ Free: 100% free. No credit card information needed. No trials offered. ✓ Unlimited: Truly unlimited. No session, speed or bandwidth limitations. ✓ Simple: Unblock the world with just one touch of the “Connect” button. ✓ Secured: Our strong SSL encryption will make you fully anonymous and secured. ✓ Support: We want to be one of the best VPN choices for you, and are always open to feedbacks and suggestions. Just shoot an email to support@northghost.com! Get Touch VPN Now! And if you love us, don’t forget to spread the love by giving us 5-stars! ------------------------------------------- ■ What is a VPN VPN stands for Virtual Private Network. When connecting to a VPN server through Touch VPN for example - it sets up a secured and encrypted connection to the server in another country. Because of the encryption process the data cannot be filtered or blocked. If you live in Sweden for example, when connect to a VPN server in US, your traffic would look like coming from the United States, instead of Sweden. ■ Why using a VPN With a VPN, you are not only able to unblock geo-restricted or censored services, such as Facebook, Pandora and Youtube; your online privacy and security will be greatly bolstered as you’ll be surfing the web completely anonymously. ■ VPN vs. Proxy VPN and Proxy can both conceal user identity through re-routing your internet traffic and change your IP. A Proxy server is however, completely browser based, whether you are using Chrome, Safari, or Firefox; and might not be compatible with certain web pages that use non-browser technology. Unlike a Proxy, a VPN service encrypts all your traffic, and will work with all internet based services. In summary, VPN will provide you with more online freedom, privacy and security. ■ Why Touch VPN Touch VPN is 100% free, unlimited, secured and super easy to use. You can connect to any of the servers below (Sweden, United Kingdom, Denmark, France, United States, Netherlands, and Canada) to enjoy unlimited online privacy and freedom. With Touch VPN you can ⇨ Access any website in any country. Bypass geo-restrictions to unblock any website wherever you are! Get access to sites that are blocked or censored by government, school or workplace. Evade firewalls to unblock Facebook, watch YouTube, and circumvent VOIP limitations. Touch VPN unblocks it all with its free VPN app ⇨ Protect Your Data from Hackers. When you’re connected to a public Wi-Fi Hotspot, your name, passwords, and personal information can be easily compromised. Touch VPN encrypts your data and provides you with banking-level security for the best protection. ⇨ Touch VPN is a one-click VPN Proxy Service. Touch VPN contains only one button. The button connects you to one of many anonymous servers at speeds faster than a web proxy. When you are not running our app we help you save your devices battery. And, we are a completely unlimited and free VPN! ⇨ Surf the Web Anonymously. Avoid being snooped by your ISP and prevent websites from ad tracking and targeting. Touch VPN changes your IP address, so your online identity is anonymous and your internet activity is inaccessible to prying eyes and businesses. ----------------------------- Big shout of thank you to users who love us and spread their love. Join the millions who are using Touch VPN!

 More by Northghost: Show all+

 Is Best VPN - Free Unlimited VPN yours? Claim it!