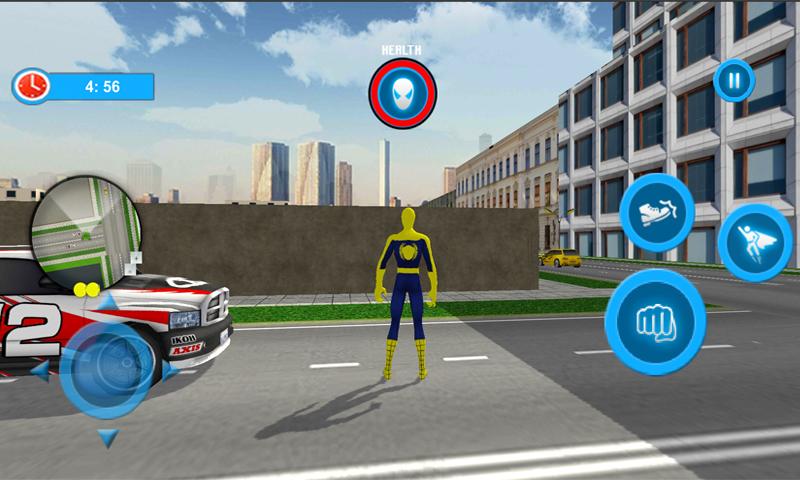 Flying Spider Hero City Rescuer is a battle strategy game provides a realistic city rescue mission of super spider heroes by defeating the evil gangster and robbers. People live a normal life when living among ordinary people but once you see the criminals are making tough to live then super action is needed to survive. Grand city has an emergency rescue situation you need to transform into a flying superhero having amazing super flying spider abilities and fight with enemy robbers the criminal heroes. An action pack including the excitement present in city survival games with the responsibility of rescue mission in strange hero games makes this flying superhero simulator one of the best spider games. Get the challenge, be the Flying Spider Superhero in this amazing spider hero interesting and fetal mission game by eliminating treacherous robot spiders. Expertly utilize your super spider hero skills to strategically defeat spider terrorist in this spider hero secret mission. Flying Spider Hero City Rescuer: Fatal Contest - where citizens are facing a danger, there is only one way; fight and protect this world! Only real champions can jump in this fatal contest to complete this task and win the contest. Prepare for epic fighting action with super heroes team. This is going to be the greatest battles in a war history. Underworld criminal mafia is snatching in streets and robbing in banks. Ladies are not safe even they are in jewelry markets to rob and get precious diamonds and jewelries. Hurry up! Reach to the robbers and safe citizens, people are asking for help. A real hero with super skills is needed to cope with dangerous gangs. City police and armed forces are failed to finish this crime scene. Show your fighting skills.Here you are the only hope, jump over, fly high and dive in streets. Enemy has dangerous weapons, use your spider hero skills and defeat the enemy. Features: - Different mission with realistic spider fights - Realistic HD Graphics - Awesome Secret Missions - Amazing sounds and ambience - Smooth Controls - Addictive Flying Spider Hero City Rescuer Gameplay